Chungmu Indoor Gymnasium, Daejeon, South Korea: with a seating capacity of just 6,000, this volleyball venue is a great size for a cage fight.  Throw in the 3 dollar beers, and I’m sold.

The main card begins with an openweight bout between two absolute beasts: Heo Jae-Hyeok – a 320-pound former kick boxer who walks out, mic in hand, singing along to “Believer” by Imagine Dragons – and Shim Gun-Oh, who measures up at a measly 265 pounds.  Heo’s panache is cut short, as he is immediately overwhelmed by Shim’s superior boxing skills.  Falling to the ground and unable to defend himself, the referee stops the fight 23 seconds into the first round.  The colossal Heo wobbles out of the cage, no longer in a singing mood.

This quick start to the evening is followed by the tournament’s sole female bout, a lightweight contest between Shim Ru-Yi and Lim So-Hee.  Both fighters have an obvious background in Muay Thai and impressive grappling skills, going hard from start to finish of the two 3-minute rounds.  While both display remarkable tenacity and stamina, ultimately the decision is handed to Shim, who had Lim tied up for much of the fight.

Next up: a bantamweight bout between Han Yi-Moon and Yoo Jae-Nam.  For the bulk of the fight Moon stalks Nam around the cage attempting to wear him down with precision kicks, while the elusive Nam bides his time, hoping to successfully counter with a strong right.  Although Nam impresses with some flamboyant kicks and even an attempted spinning back fist, Moon’s cautious style doesn’t make for a crowd pleasing fight.  Perhaps realizing his strategy isn’t working, seconds before the end of the final round Nam attempts a take down, only to be caught in a guillotine choke, forcing him to tap.

The excitement in the room is ramped up as the popular Hong Young-Gi faces off against the first Japanese contender of the evening, fellow lightweight Nakamura Koji.  Anyone familiar with the history of Korea and Japan can guess the nationalistic sentiment such a fight instantly generates.  Koji meets some aggressive jeers from what is generally a well-behaved crowd.  Hong is cool as ice as he walks out in a taekwondo gi and black belt to a Korean punk rock tune I can’t identify but gets the fans clapping.  What proceeds is a highly exciting but somewhat odd fight, with repeated stoppages for knees to the crotchular region (two from Hong and one from Koji), which get collective empathic groans from the crowd when replayed in slow motion on the big screen.  Hong is a thrilling fighter to watch, delivering an array of sophisticated kicks from his taekwondo arsenal, the sound of which, when landed, reverberate through the small auditorium.  Koji survives by his sharp reflexes and his iron chin, bouncing back from foot strikes that would drop a man of lesser mettle.  Despite some impressive take downs from Koji that reveal his strong Judo background, he cannot turn the tide in his favour and looses by decision.

The second openweight bout of the evening comes from two old warriors, the 265 pound Choi Mu-Bae and Japan’s 243 pound Fujita Kazuyuki.  The 47-year old Kazuyuki is a legend of the sport, and it shows in the respect he receives from the Korean crowd, both before and after his performance in the cage.  His physique and his dramatic persona remind me of a childhood American wrestling idol, George “The Animal” Steele.  As the fight begins, the two giants stand and trade blows, but the advantage quickly turns to the superior skills and seeming indestructibility of Kazuyuki.  The referee stops the fight early in the first round as Choi is grounded and failing to protect himself.  The fighters clearly have a history, and bromance fills the cage as the two veterans hug it out, pose for the cameras and shower each other with accolades.

Now it’s time for the main event: 28-eight-year-old reigning featherweight champion Choi Mu-Gyeom is here to defend his title against a 23-year-old Lee Jeong-Yeong.   At this moment, Choi appears to be the baddest M.F. on the planet, waltzing out to Paul Anka’s “You Are My Destiny” with a moustache that makes Tom Selleck look like a scrub. 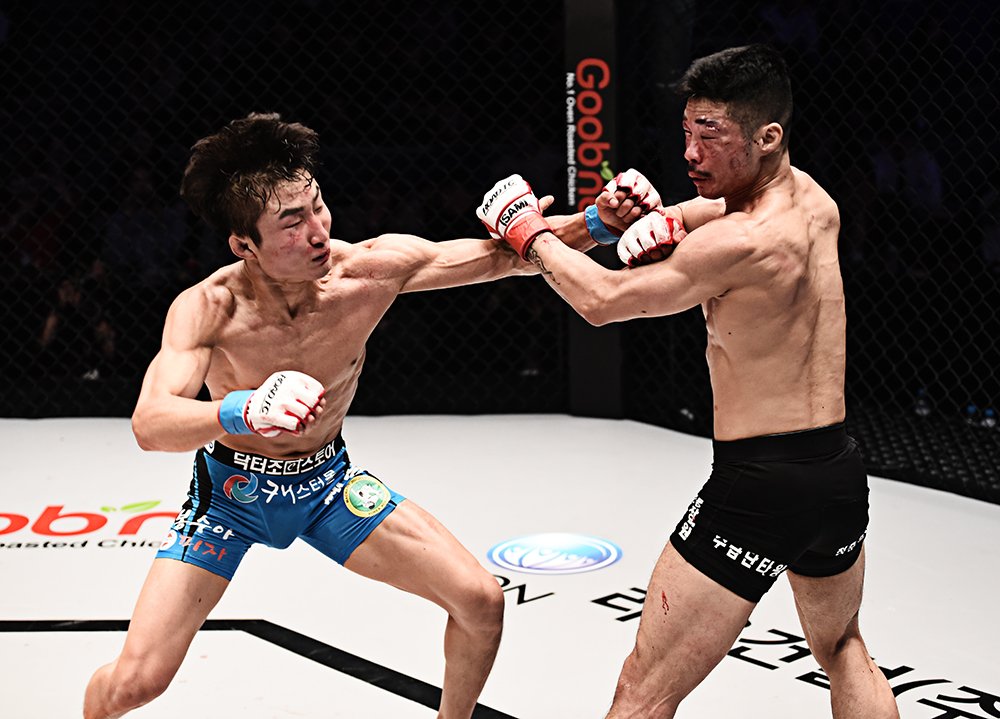 Remarkably, the battle stays standing for its entirety, as the two equally cool and collected fighters trade punches through three action-packed rounds.  Lee smiles like a crazed demon, and when he gets hit his grin widens, imploring Cho to give him some more.  His timing and precision are incredible, and it’s soon evident he can out-box the reigning champion, who seems unable or unwilling to switch strategies.  This wasn’t supposed to happen – we have been told that Choi is the striker and Lee the ju-jitsu expert.  By the end of the second round Choi is well-bloodied.  The fight is stopped twice as doctors examine the gash above his left eye.  In the third round, Lee’s steady but unrelenting pressure mounts, with the referee stopping the fight just as the bell sounds.  Ladies and gentlemen, we have a new champion.